“Until the lions have their own historians, the history of the hunt will always glorify the hunter.”

One man took it upon himself to tell the world the story of Nigeria through the eyes of its own people. Chinua Achebe (born Albert Chinualumogu Achebe) was the studious son of an evangelical priest. A student of English literature, he started writing in the 1950s, choosing English as his medium but weaving the storytelling tradition of the Igbo people into his books.

His characters were insiders — everyday people such as the village chief (in Things Fall Apart), the priest (in Arrow of God), or the school teacher (in A Man of the People). Through their stories, we witness a Nigeria at the crossroads of civilization, culture, and generations.

His pen brought to life the land and traditions of the Igbo: the hum of everyday village life; the anticipation and excitement of sacred masquerades; the stories of the elders and the honor of warriors; the joy of family and the grief of loss.

Considered by many to be the father of modern African literature, Achebe was awarded the Man Booker Prize in 2007. Surrounded by iconic images of his most famous literary works, today’s Doodle celebrates his legacy on what would have been his 87th birthday.

Early concepts of the Doodle below 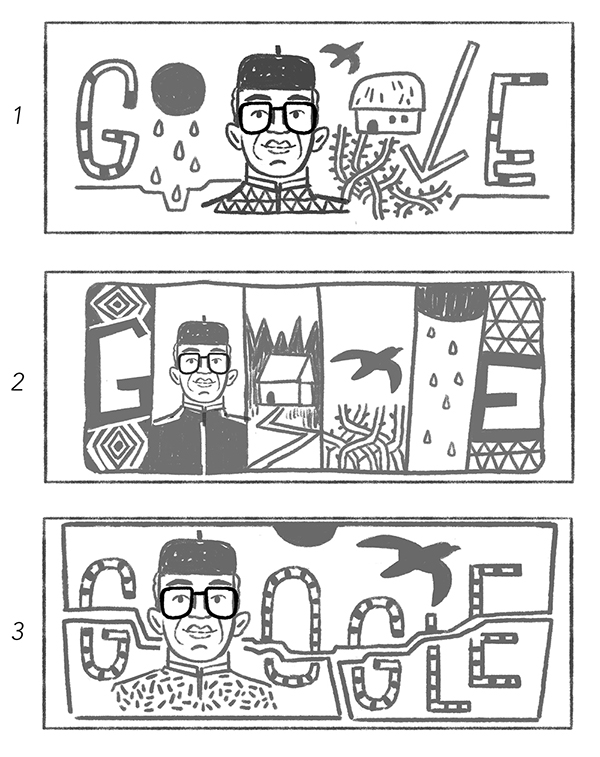